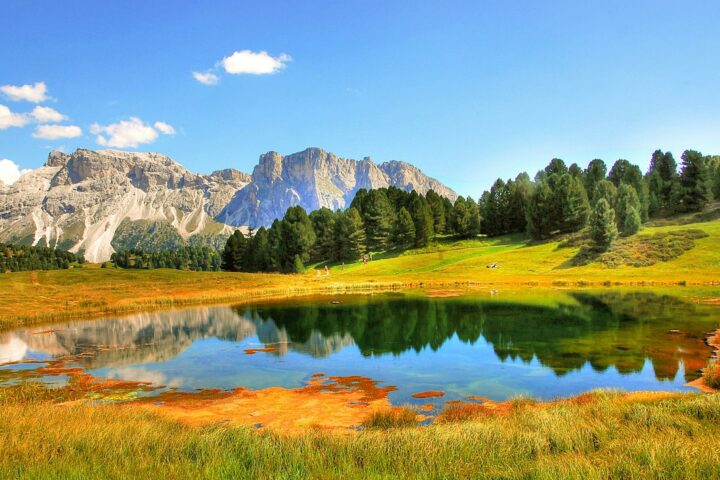 PART 5 – Jack Hunter (1916-1994) preaches on the topic of the appearing of Christ in glory and the millennial kingdom that He will set up and reign over for 1,000 years. Israel restored, the world regenerated and the church ruling and reigning with Christ; this is the future promised in Scripture. Reading: Revelation 19:11-21 (Preached in Ayr, Scotland, in 1982)
Jul 19, 2022 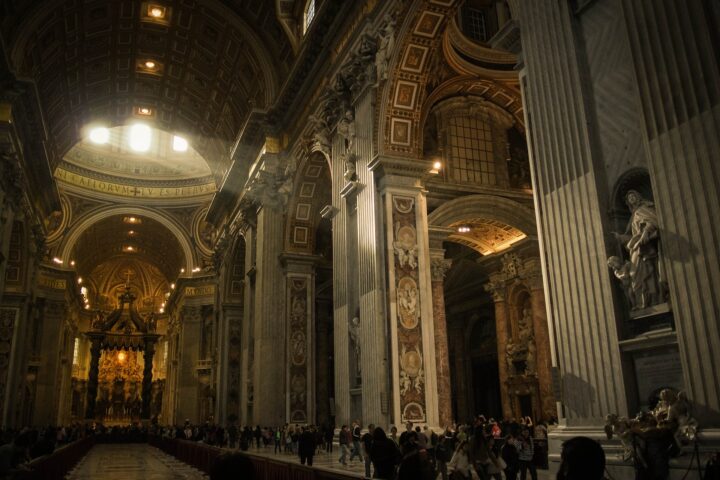 PART 4 – Jack Hunter (1916-1994) preaches on the “one world church” of the end times, mystery Babylon the Great. He traces Babylon through Scripture from Genesis to Revelation and gives pertinent warnings about the present ecumenical movement, the precursor to the “Mother of Harlots” of the period known as the great tribulation. Reading: Revelation 17-18. (Preached in Ayr, Scotland, in 1982)
Jul 17, 2022 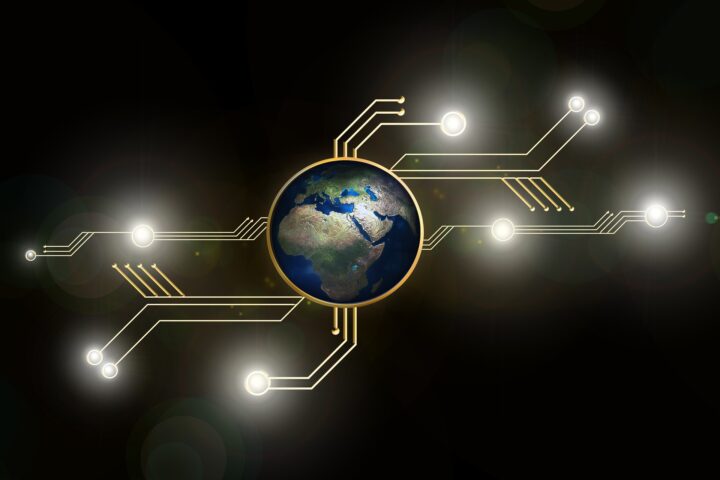 PART 3 – Jack Hunter (1916-1994) preaches on the coming world superman, the antichrist, and various other personages who will be prominent in the end times, such as the false prophet and the King of the North. The antichrist’s number will be 666 and no man will be able to buy or sell without that number in their forehead or in their right hand. Reading: Revelation 13:1-18. (Preached in Ayr, Scotland, in 1982)
Jul 1, 2022 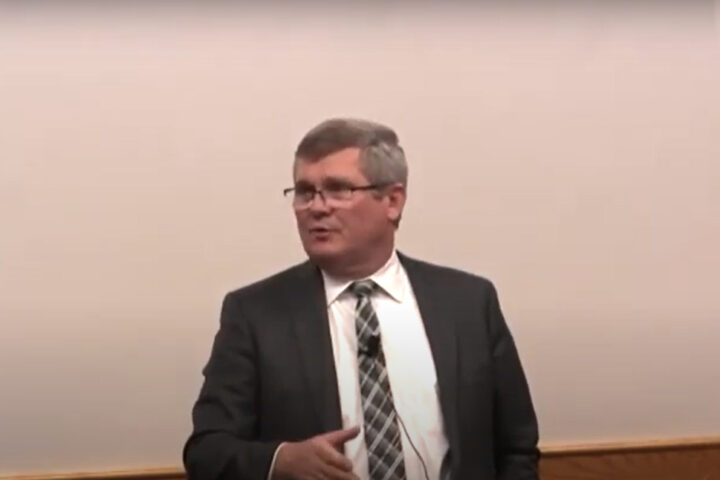 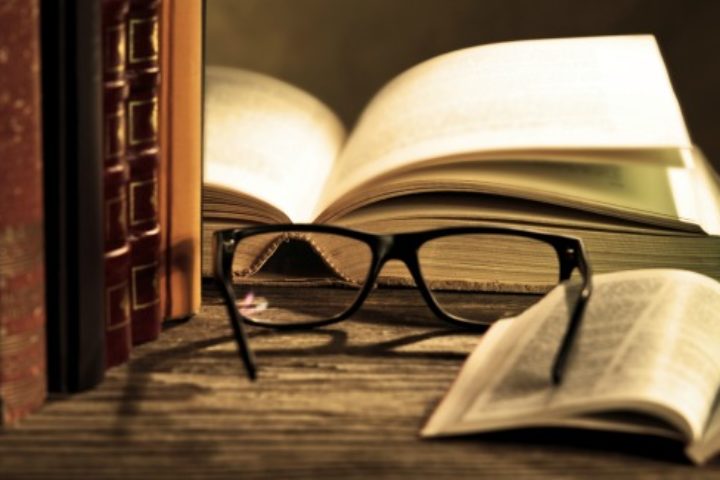 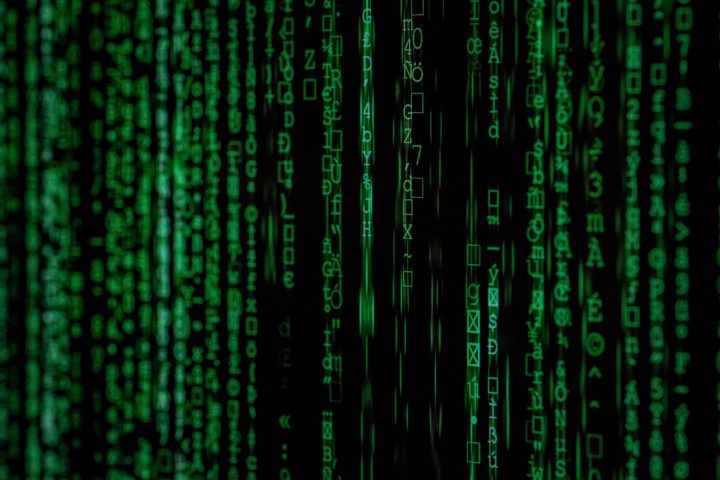 Sam Jennings preaches on the topic of what the Bible calls “the mark of the beast” (666), which is mentioned 8x in the book of Revelation. This mark will be introduced in the tribulation period after the rapture of the church, once the antichrist is on the scene. Mr Jennings asks two questions: 1. What is the mark of the beast? and 2. Why will there be a mark of the beast? He suggests it is a literal visible mark…
Jun 18, 2020

PART 7 – Jim Allen finishes his series on the “7 Churches of Asia” with a message on the letter to the church at Laodicea from Revelation 3:14-22. Looked at historically, he sees Laodicea as a picture of the charismatic movement. Practically he sees a wealthy glamorous church that was not aware of its real spiritual condition of poverty. Mr Allen works his way through the Lord’s message to this church sentence by sentence and makes challenging applications. (Message preached…
Jun 13, 2020

PART 6 – Jim Allen takes up the message of the Lord to the church at Philadelphia from Revelation 3:7-13. Philadelphia had “a little strength”. They “kept God’s word” and had “not denied My name”. They are warned “Let no man take thy crown”. So, the Lord gives information, instruction and admonition, and there’s a lot for us to learn from the message to this church. Mr Allen contends that Revelation 3:10, which says “I will keep thee from the…
Jun 8, 2020

PART 5 – Jim Allen takes up the message of the Lord to the church at Sardis from Revelation 3:1-6. Sardians generally were a proud people. Proud of their history and prowess. But the local assembly in that town had very little that the Lord could commend. In fact, the Lord says they had a “name to live but are dead”. In other words, they had a reputation, but that was it. Mr Allen challenges his audience with this message…
Jun 4, 2020

PART 4 – Jim Allen takes up the message of the Lord to the church at Thyatira from Revelation 2:18-29. Mr Allen brings out 4 lessons: historical, local, prophetic and practical. This is the “false church” where Jezebel held sway, bringing with her deception, seduction and compromise. If Ephesus is passion, and Smyrna is persecution, and Pergamos is patronisation, then Thyatira is pollution. Taking the historical view of the 7 churches, Mr Allen dates Ephesus at 70-170AD, Smyrna at 170-312AD,…
Jun 1, 2020

PART 3 – Jim Allen takes up the message of the Lord to the church at Pergamos from Revelation 2:12-17. This is the faltering church that was on a knife edge when the Lord spoke to them. He lines up the details of this church with the period in history after 312AD when the Emperor Constantine embraced Christianity. No longer was persecution a problem: now it was popular to be a “Christian”. This brought all kinds of compromise and mixture…
May 29, 2020

PART 2 – Jim Allen takes up the message of the Lord to the church at Smyrna from Revelation 2:8-11. This is the “suffering church” of the 7, recorded by John the apostle on the Isle of PAtmos (pictured above). Mr Allen’s remarks centre around 4 things: Christ’s character – “He lives”. Christ’s consolation – “He knows”. Christ’s command – “He speaks”. Christ’s challenge – “He opens their understanding. (Message preached in Wallingford, Nov 2004)
May 28, 2020

PART 1 – Jim Allen begins a series on the 7 Churches of Asia (Revelation Chs 2-3) with a 24 minute introduction, before looking in detail at the first of the 7 churches, namely Ephesus. Each of the 7 churches was 1. a specific church, 2. manifested a certain spiritual condition and 3. represents a stage in Christian history. John the apostle is on the island of Patmos in Greece (pictured above) and 7 letters are given to him by…
Apr 23, 2020 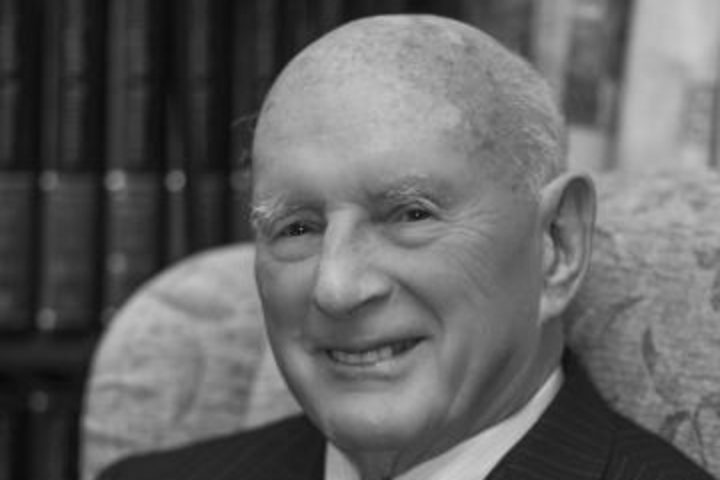 Jim Allen grew up in Lurgan, Northern Ireland. As a young man raised under the preaching of the gospel he became quite indifferent to it. He would sit at the back of the Gospel Hall near the heater and sleep through gospel meetings. Then in his own words: “When Mr. Harold Paisley and Mr. Joe Poots began gospel meetings in a little hut in Dollingstown, two miles from Lurgan, N. Ireland, an older cousin persuaded me to miss the cinema…
Jan 20, 2020 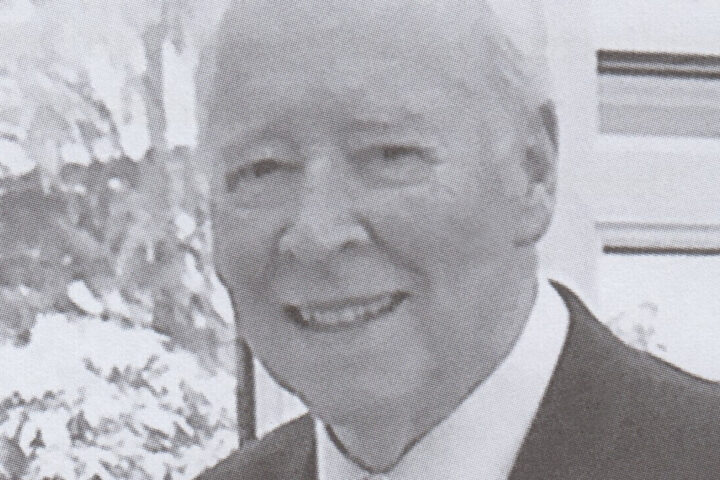 Jim Flanigan (1931-2014) was saved as a boy of 11 in Belfast, shortly after his mother’s homecall. When his family home was destroyed in the air blitz of May 1941, the motherless young Jim was evacuated from the city. Back in Belfast 2 years later he was taken by a friend to Parkgate Avenue Gospel Hall where he grasped the principle of gathering to the name of the Lord in accordance with the pattern of the New Testament. In 1946…
Apr 14, 2019

There are 4 main views of the timing of the book of Revelation: preterism, historicism, idealism and futurism. Michael Penfold explains that how we choose between them ultimately comes down to how we interpret Bible prophecy. He sets out the general laws of hermeneutics and then gives specific direction as to how to interpret prophetic symbols. He finishes by testing the 4 views against three items in the book of Revelation (Message preached 14th Apr 2019)
Jan 3, 2016

Michael Penfold takes up the subject of man’s future state under three headings: Where do people go at death? Where did Christ go at death? What is the future resurrection programme for the Church, Israel and the “wicked dead”? He deals with a number of false ideas such as annihilation, reincarnation, purgatory, soul-sleep and universalism and refutes them all from scripture. He also critiques the two-compartment theory. A wide ranging message that includes a look at the first and second…
Apr 6, 2015 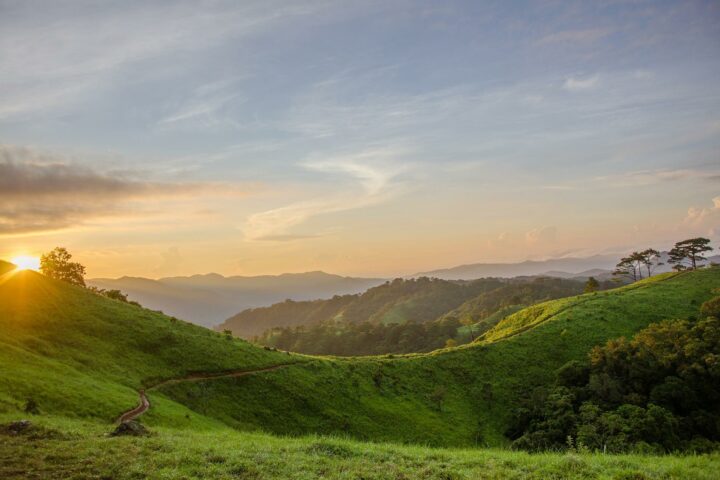 Colin Hutchinson preaches on Rev 15:3 – “Great and marvellous are Thy works, Lord God almighty.” He traces God’s sovereign dealings in the lives of His people, using individuals like Abraham, Jacob and Naomi to illustrate the need to trust in God in every circumstance, however dark and trying. “We will never regret leaving our lives in God’s hands” (Message preached in Bicester, Easter April 6th 2015)
Oct 25, 2008 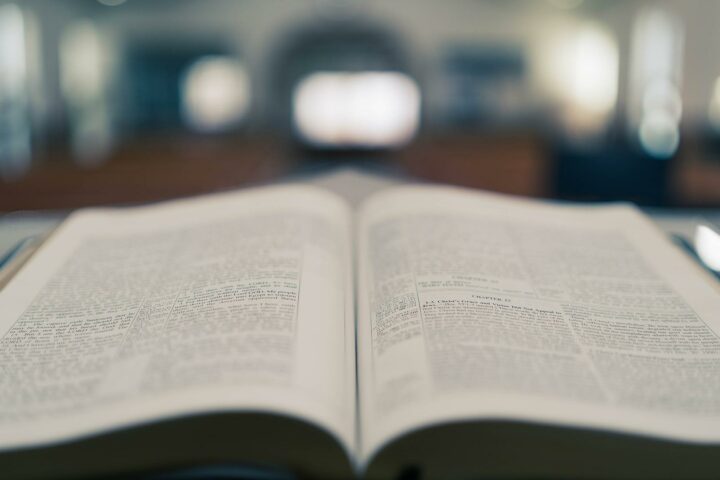 Ian Jackson expounds Revelation 20 under the heading “The Decisive Fulfilment of God’s Plans for Israel and the Church”. A wide-ranging exposition of the millennium, the final judgment and the eternal state (Message preached 25th October 2008)
Oct 22, 2008

Ian Jackson expounds Revelation Chs. 4 and 5 under the heading “The Dramatic Unfolding of the Tribulation”. He concentrates on the Throne, the Lamb and the Book, which he calls the “title deeds of the universe” (Message preached 22nd October 2008)
Jul 4, 2006 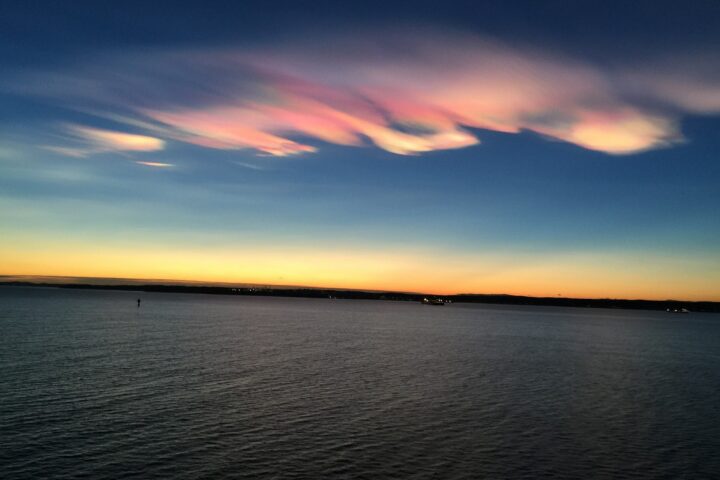 Jim Baker teaches on the ‘manifestation’ of Christ at the second advent from Revelation, 2 Thessalonians and Zechariah, including what happens to the beast, the false prophet and Satan. (Message preached 2006)
Dec 26, 1973 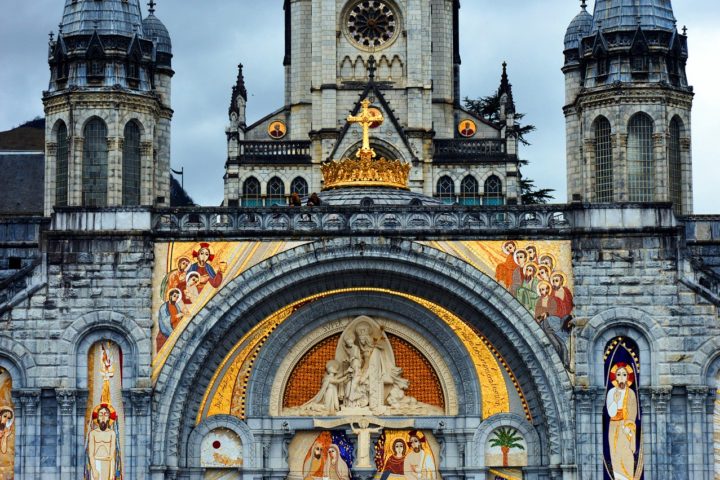 Eric Parmenter preaches from Revelation 17 on the false religious system of Babylon. This was a powerful address and showed a keen level of discernment for what was happening in the ecumenical movement at that time (Message preached in Bicester 26th Dec 1973)
Today Why I am Not an Atheist (41…
Yesterday Creation Topics Part 2 –…